In a World of Driverless Cars, We'll Still Need Transit

Driverless cars have the potential to bring great benefits – reducing the carnage on our roads and, if designed well and integrated into the transportation system properly, promoting energy efficiency and the efficient use of infrastructure.

But, in a world of driverless cars, will there still be room for transit? If we want our cities to be successful, vibrant hubs of commerce, living and culture, the answer will be “yes.”

The reason: as transit expert Jarrett Walker wrote in a 2012 blog post on driverless cars and transit, “technology never changes facts of geometry.” That is, the physical arrangement of a place helps determine the functionality of the system of transportation used to serve it. Build a subway under a cornfield and no one will ride it. Dump thousands upon thousands of cars into compact city centers each day and … well, we all know what happens.

If you define a "car" as "a separate enclosed vehicle for every passenger or party", then the geometric fact about all cars, self-driving or not, miniaturized or not, is that they take vastly more space per passenger than effective public transit. This will not be a problem in low-density suburbs, but cities, by definition, are places with relatively little space per person. 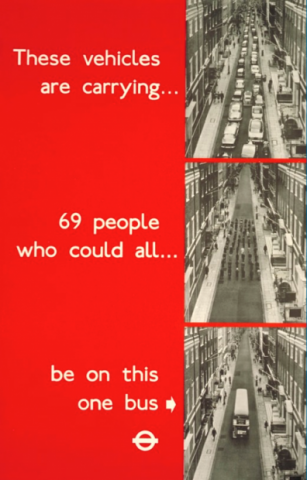 Let’s illustrate by looking at one corner of downtown Boston: Suffolk County Census Tract 303, which occupies just over a quarter of a square mile.[1] Roughly 58,000 people work there – more than work in any city or town in Massachusetts except Cambridge and Worcester.[2] Nearly 5,000 people live there as well, a number that has been growing with the resurgence in downtown living. And that’s not all: Tract 303 is home to City Hall, Faneuil Hall, the New England Aquarium and the Rose Kennedy Greenway. If you’ve ever been a tourist in Boston, or escorted a tourist around Boston, you’ve probably spent time in Tract 303. 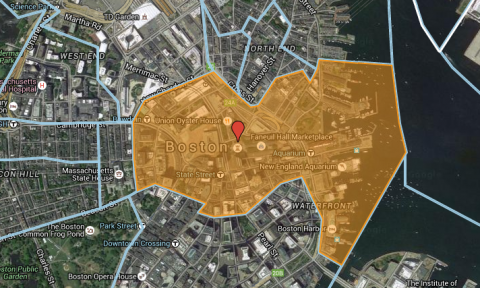 How do people move to, from and through Tract 303 today? With the exception of motorists traveling under it via the I-93 Big Dig tunnel, relatively few come by car. Among the area’s workers, 15,000 use the subway as their primary means of commuting, 8,500 use passenger rail, and 6,000 take the bus. Just 19,000 report driving alone and even then the figures are deceiving, since Census commuting figures are based on the mode of transport used for the greatest distance on an individual’s commute, meaning that many of those “car commuters” might physically arrive in Tract 303 via transit (accessed at a park-and-ride station) or on foot (after parking remotely).

Conservatively, let’s say that somewhere between a TD Garden’s and a Fenway Park’s worth of people travel to or from Tract 303 daily using means other than private motor vehicles. It is difficult to envision how such demand could be met using individual vehicles operating on already clogged surface streets – at least not without creating a solid wall of traffic for much of the day that would seriously degrade the urban quality of life that draws people and companies there in the first place.

Tract 303 is not the only compact area of Boston or other cities that relies on public transportation. Nearly 240,000 people who work in the city of Boston used public transportation as their primary means of commuting in 2014 – a figure that has grown by 43,000, or 22 percent, since 2006, according to the Census Bureau’s American Community Survey. That is a great deal of demand that would need to be served by a new mode of transportation if conventional transit service were to go away.

To reiterate: driverless vehicles have the potential to do many wonderful things – including expanding access to shared mobility to populations difficult to serve via traditional transit, providing efficient first-mile/last-mile connections to transit service (such as those now touted by Lyft and Uber), and dramatically reducing the space allocated to parking in our cities and suburbs. The nature of some types of transit service could change, and some routes may no longer be served in the way we serve them now. But transit’s role in efficiently moving large numbers of people to and through our cities will remain important even in a world of driverless cars.

If you like vibrant urban places like Tract 303 – or even if you don’t like them but appreciate the economic activity they generate and tax revenue they bring to your city or state – you want to make sure people can access them while preserving the quality of life of those who live, work and play there. And that means you will need good transit – today, tomorrow, during the decade or two that it will take to transition to driverless cars, and likely for as far as the eye can see.

[2] Though not all of these workers are full-time. All employment and journey-to-work figures based on five-year (2006-2010) American Community Survey data accessed through the Census Transportation Planning Products. Population figures based on 2012 ACS data obtained through ArcMap GIS software, the use of which is made possible through the generosity of ESRI.