Congestion: A Crisis We Can Fix

Greater Boston has the worst traffic congestion in the country, and every corner of the state suffers from traffic delays. Congestion is a drain on our economy and the great people that live and work here.

Each day, commuters sacrifice time, money, opportunity, health and clean air - all because our policies are prioritizing cars over people.

In August, 2019, MassDOT issued a report, Congestion in the Commonwealth, that confirmed that traffic is bad and getting worse. There's a lot to like about this report, but there are also areas things not to like - and some important things that are missing. You can read T4MA's response to MassDOT's congestion study report by clicking below:

Traffic congestion is holding back the Commonwealth at a time when the state must move boldly forward. When the State Legislature debates the policies and funding to help Massachusetts realize its potential, we need them to deal decisively with traffic, prioritize moving people, make big investments in public transit, and to price roadways based on demand.

What do we like in the MassDOT study? Here are ten examples:

Finally, here are five things the report should have included but did not:

Congestion Champs: A Title We Don't Want To Repeat

Boston is used to victory parades. So we recently asked Massachusetts residents their thoughts on being #1 yet again. But this time, it's not a championship we want to celebrate! Watch for yourself:

We should be leading the way on solutions, not getting left in the dust by cities like Seattle, San Francisco, and New York. Read this op-ed in The Boston Globe by Nick Sifuentes, Executive Director of the Tri-State Transportation Campaign to learn about how they are tackling congestion in the Big Apple.

Leading advocates, legislators, and the Governor's own Commission on the Future of Transportation agree that we have to beat congestion. Let's get going! 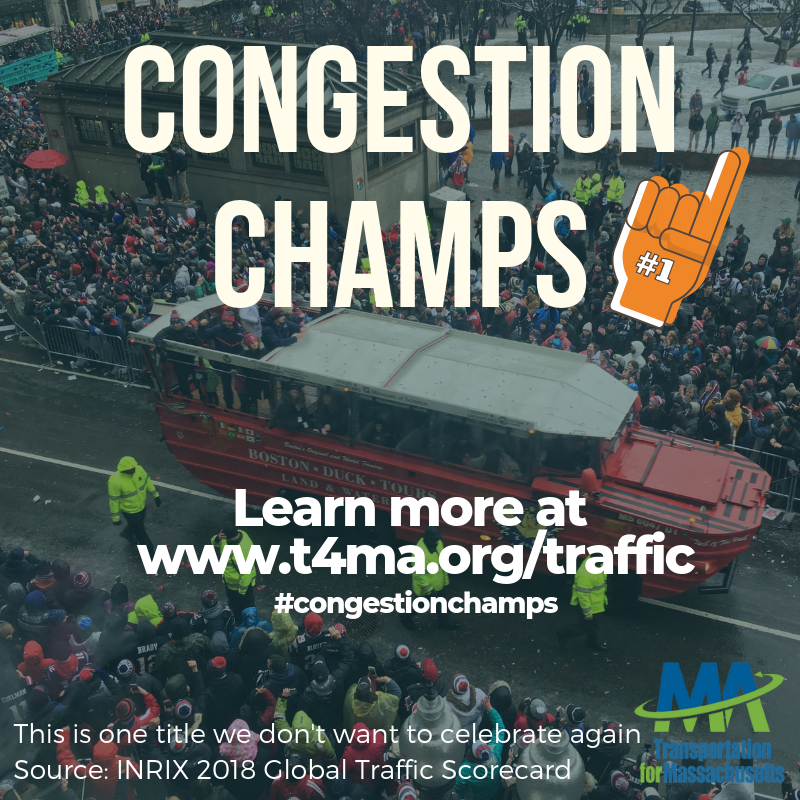 The Hub’s latest “championship” sees a region at a standstill

The national traffic data firm INRIX has confirmed what Boston-area drivers and bus riders already knew: Boston has the worst traffic in the country. INRIX's annual Global Traffic Scorecard rated us worse than long-time title-holder Los Angeles. This isn't what people mean when they say, "Beat L.A." According to INRIX, the average driver in Greater Boston spends 164 hours in congestion, costing the typical driver $2,291 per year in lost productivity and wasted fuel.

See this Boston Globe article for more about this report.

This latest “victory” is a reminder that congestion threatens our economy, our environment, and our quality of life. It raises the urgency for MassDOT to embrace solutions. And the Governor's own Commission on the Future of Transportation has recommended congestion reduction in its December 2018 report.

See the T4MA press release for more news about #CongestionChamps.

Watch our 2018 video to learn how we can do a smarter job of managing our limited road space:

Congestion is not just about cars and drivers. Buses use our crowded roads, too. Watch this video to see how smarter tolling can improve the rides of people on one of the busiest routes, the MBTA’s #111 bus. We’ve got a Spanish-language version, too.

Transportation equity must be a high priority for policy makers. There is a perception that "free," or flat rate pricing, is inherently equitable. However, roads that are priced to promote efficiency, in combination with programs to ensure equity, better serve the public interest. For a comprehensive review of this topic, see Pricing Roads, Advancing Equity, a new report published by TransForm. 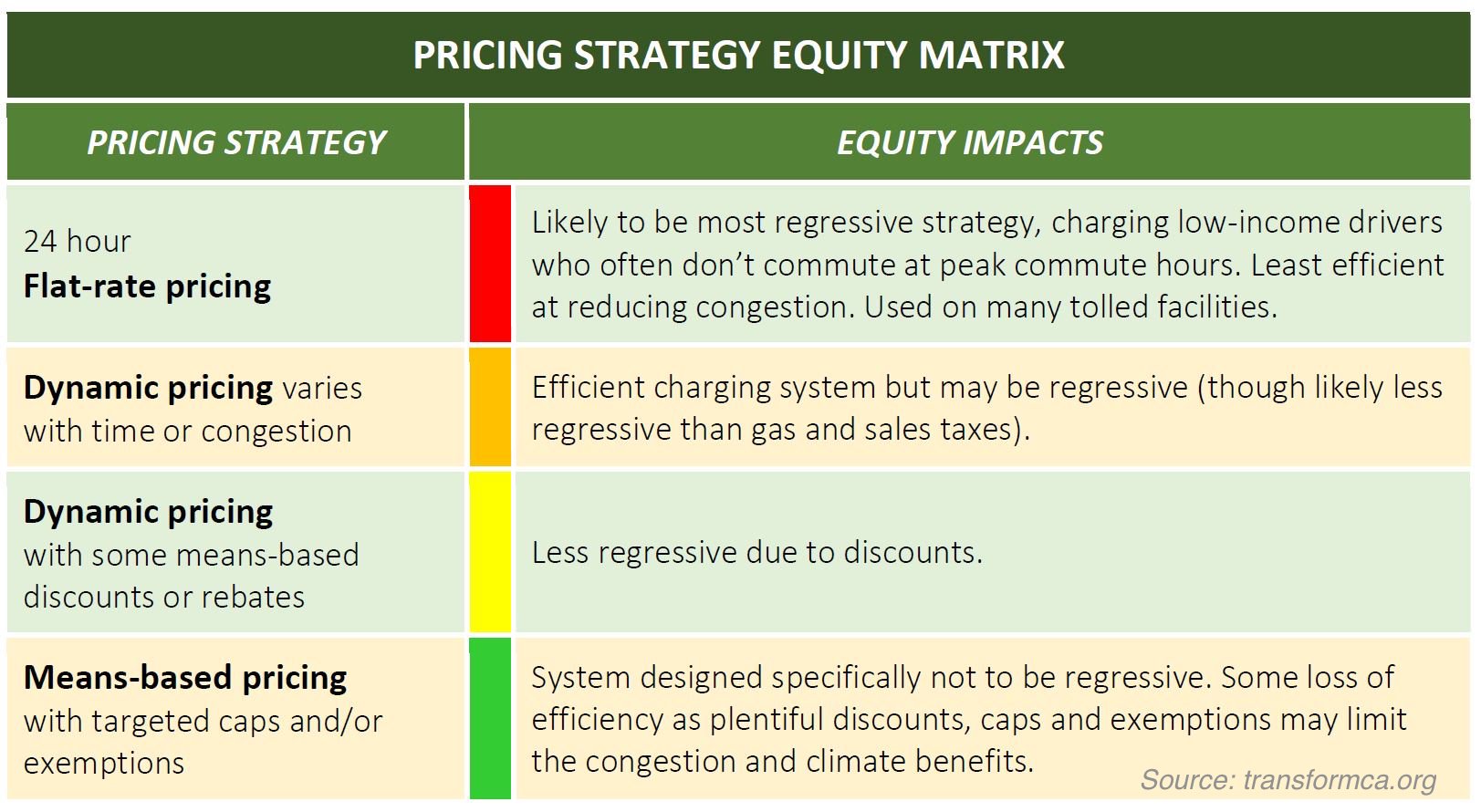 How Can Smarter Tolling Help?

We need to change how we think about congestion and how to solve it.

Regions across the country and around the world have learned that fundamental economics - putting a fair value on a scarce resource, in this case pavement at rush hour - is a tool that solves congestion.

A July 2018 segment on WBZ-TV explained how traffic is choking the Boston area, and how smarter tolling can help: 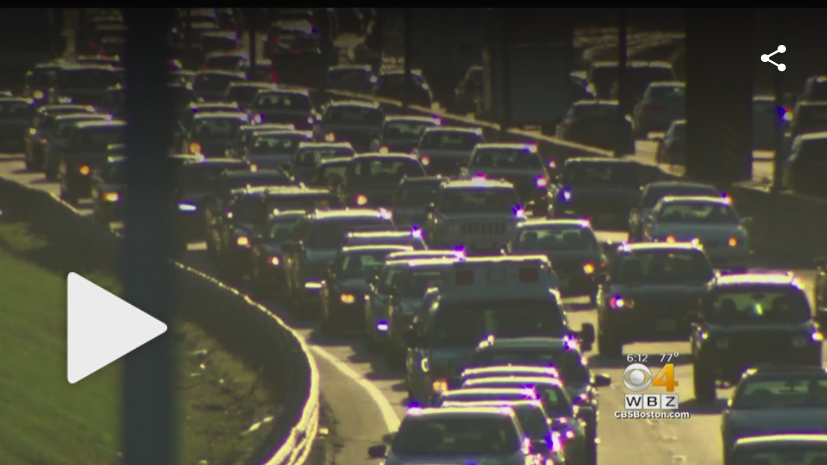 And while no one likes to pay more, a recent public opinion poll shows that a majority of voters actually support smarter tolling if the revenue is used to solve congestion. People get it.

Of course, we are paying for congestion right now with lost time, air pollution, and quality of life because we can't spend time with family and friends when we are stuck in traffic.

In addition to hastening the ongoing congestion study and producing a draft report, MassDOT should embrace a pilot program to provide discounted tolls to drivers who drive off-peak. This would free up road space for those who need to drive during rush hour.

Getting just 5% of cars off the road at rush hour can lead to traffic reductions of up to 20%. That’s why your commute feels so much better on a Friday morning in the summer.

Imagine having that feeling every day.

What do experts say?

What can you do?

Share this page, read our blog, share our video, check out our fact sheet, and sign up today to help us tell MassDOT that it's time for smarter tolling.