The Boston Neighborhood Bike Forum on April 29 was a landmark event for Boston and cyclists. Sponsored by the Boston Public Health Commission and the Boston Cyclists Union, it was organized with the help of Angela Johnson, the Program Associate at the Transportation for Massachusetts coalition. We caught up with Angela to get her take on this event. 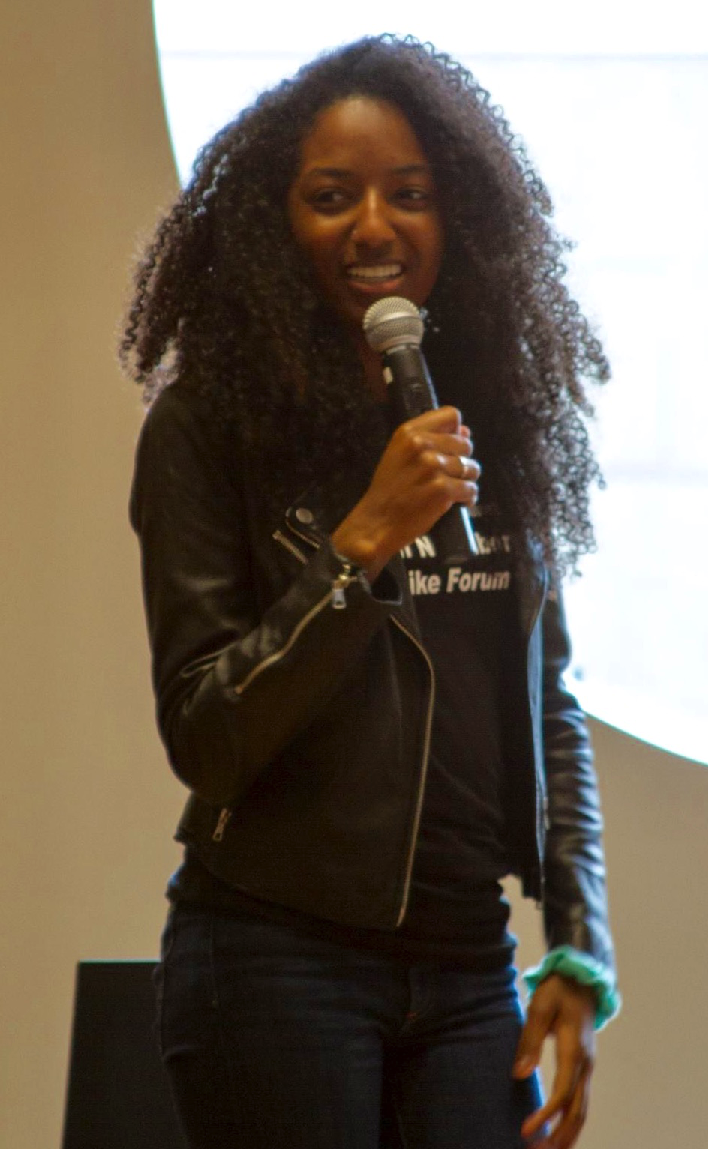 Why have a Bike Forum?

We organized this forum to hold a mirror up to people who bike in Boston’s neighborhoods, to show them that they have the ability to organize, advocate and build a better community. Biking is a necessity for many, and a choice for many people; but for all who travel on bikes, it is essential to do so with safety, convenience and dignity. That is not the case today.

We were gratified that 128 people participated, and primarily people of color from Boston neighborhoods. That is important because for people in many communities, we feel invisible in terms of the services and infrastructure that is often taken for granted. But the number of people of color biking to work has doubled in the last decade, and will surely rise in the years to come. And the stereotypical lanky, lycra-sporting male is less representative than ever of the diverse culture of cyclists. 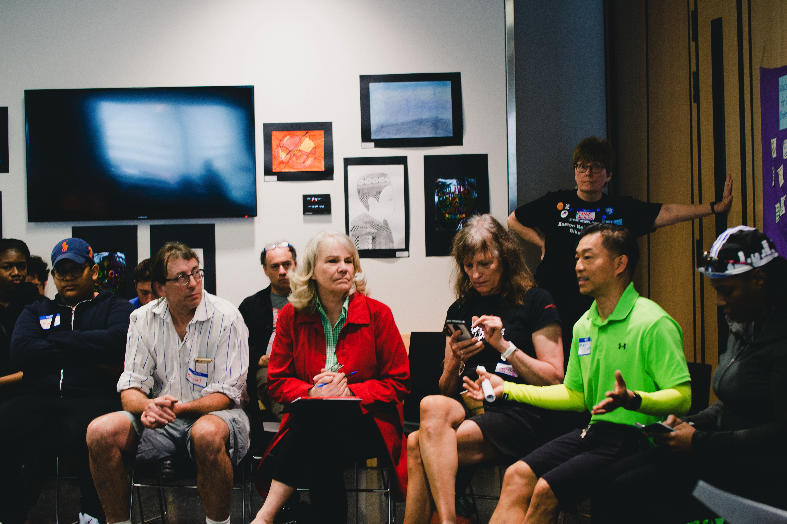 What was the program?

We covered many topics: Safety, Advocacy, Entrepreneurship, Organizations, Youth, and the forum I organized, “Who Bikes Boston? Claiming Your Identity in Boston’s Bike Culture.”

Why is culture and identity important?

Culture and identity is important to everyone, and conversations about identity are essential to promote communication and understanding. The "Who Bikes Boston” panel was created to give an opportunity for residents of color to share their experiences biking in the city in a space specifically conceived for us.

The secondary goal of this session was to debate who gets to be called a cyclist. I want to push back against the idea that folks of color, especially Black people, don’t bike. We do. 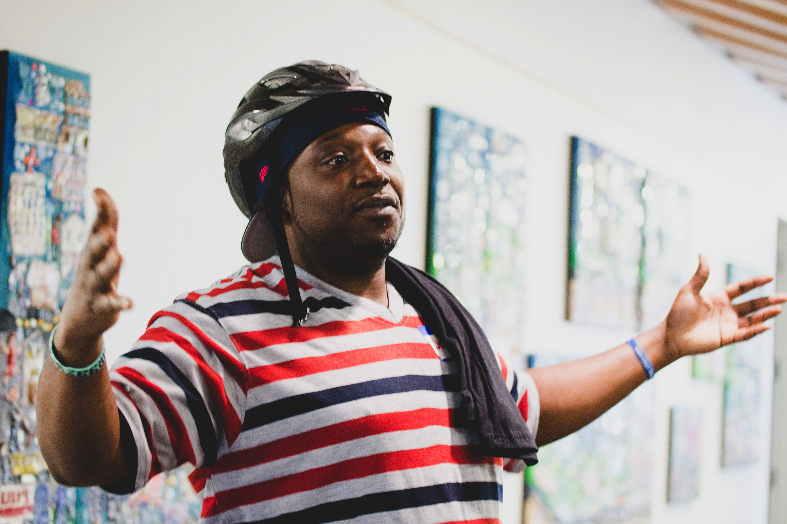 What’s your perspective and how did that shape the panel discussion?

My experience is as an Afro-Latina, a cyclist, a bike commuter or a “person who bikes.” As a transportation advocate, biking in Boston does feel quite white. For some of my peers, this perception can lead to feeling alienated, or associating bikes with a certain race and with a higher socioeconomic status. The phrase, 'Bike Lanes are White Lanes', comes to mind. In fact, there's even a book with the same title.

So, it was very important that the panel feature both speakers of color and a facilitator of color in order to foster trust. The set-up of the space was in a circle with the hope of attendees feeling that their responses were equal to the panelist and facilitator.

Who do we think bikes, and who is actually riding?

We started by breaking down some stereotypes. Within communities of color, there is a perception of today’s cyclist: white, male, fit and dressed for riding. He owns a very expensive road bike, or a fixie, if he’s a millennial. Socioeconomically, the cyclist is split into two camps: middle to upper middle class racing cyclist or a student with a disposable income.

These broad generalizations depict types of cyclists, but neither of them actually constitutes the majority. The average cyclist/bike commuter is more likely to be: 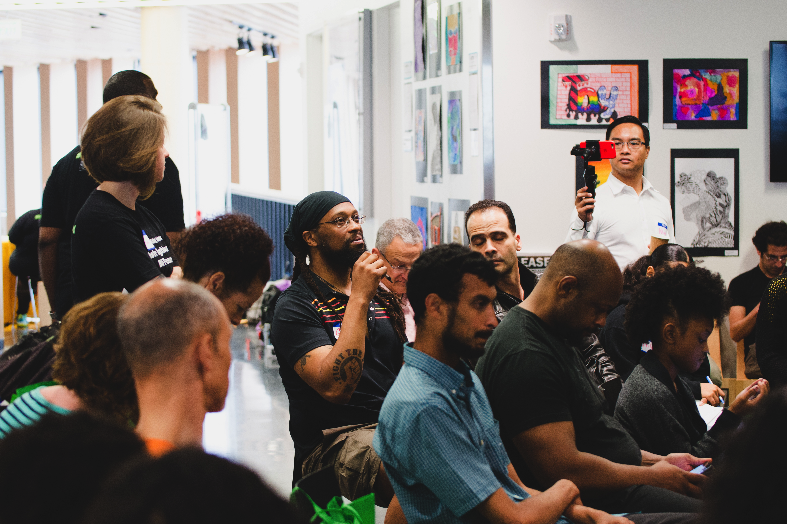 What does it mean to be “invisible?”

I argued in the panel that “cyclist” should be the base layer of biking and on par with “People Who Bike”. The dominant perception of who bikes does not reflect the majority. In fact, those who are more likely to fall under the title of “Invisible Cyclists” are actually more likely to be on bikes!

So, why is a small group perceived as “cyclists” and the majority group are “invisible”? Changing the term “cyclist” to fit a broader group of people could also help to normalize various types of people on bikes, rather than defaulting to white men in spandex. We need to think broadly about who is actually on a bike, and break out of stereotypes.

Anecdotally, I know quite a few white dudes who would love to no longer be the poster children of cycling!

So, who is actually biking?

The biking renaissance is on and POC are at the forefront. 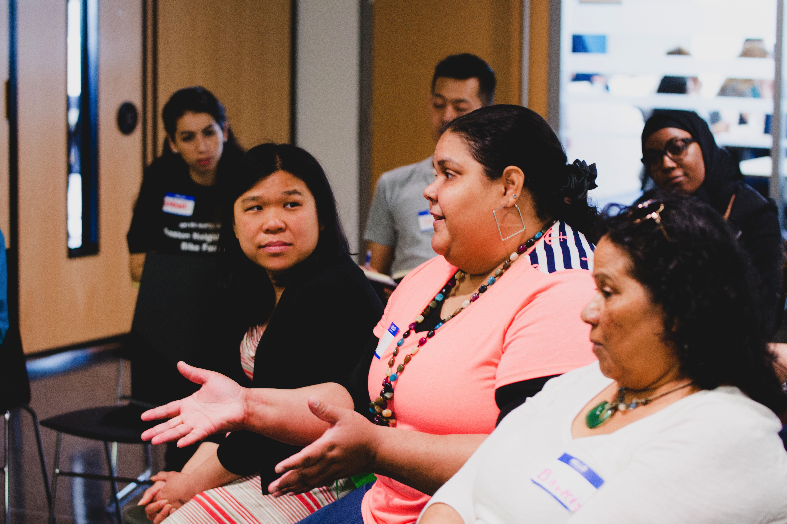 Conversations around race are often difficult. How did this go?

It went well, because we connected the personal to the broader social discussion. Race can be a tricky subject to discuss, given that it stirs very personal feelings regarding our own sense of identity and sense of place in the world. But race in itself is a broad topic.

Future conversations regarding biking should introduce intersecting topics such as biking as a woman, biking as a person of the LGBTQ community, and biking for efficiency vs. biking for survival.

Finally, bikes, like cupcakes, beer, and Edison bulbs, may have come to be associated with gentrification and upwardly mobile (white) millennials, but in the United States, we cannot underestimate the symbolism of social mobility and the automobile.

We also need to elevate all people who bike, and get away from biking as a need – something where people are deserving of pity – and move towards biking as a choice that benefits the individual, the community and society as a whole.