Keep the Change: Why We Still Need to Cap MBTA Fare Hikes

By Kristina Egan and Tony Dutzik

The debate over Gov. Baker’s proposed MBTA overhaul has been loud and often heated. Supporters and opponents have taken to the airwaves – and even the streets – with vigorous arguments about privatization, union rights and governance of the agency.

One part of the governor’s plan, though, has attracted less attention: the proposed lifting of the two-year-old cap on MBTA fare hikes.

To understand the importance of fare policy, it’s useful to take a step back – way back, in fact – and ask a basic question: why do we charge transit fares in the first place? We charge fares to raise revenue and also to assure that riders pay a “fair share” of the costs of the services they receive.

Nowhere in America, however, do the fares paid by transit riders cover all of the costs of running a major transit system. (Gas taxes and tolls don’t pay the full cost of roads, either.) The reason: we create transit systems to benefit society, not to maximize profits. Raising fares on transit riders might increase revenue, but if the effect of doing so is to put transit users back onto congested streets and highways, deny people access to economic opportunity, and increase pollution, the benefits to society are reduced.

Historically, the MBTA has tried to balance these twin imperatives of raising revenue and increasing ridership. The agency’s 2012 fare policy states the agency’s intention to “increase ridership, utilization and occupancy” as well as to “maintain or increase [its] revenue stream.”

Since 2000, however, the balance has been tilting toward higher fares. MBTA subway and bus fares have increased by more than 50 percent since 2000 (see figure below), and covered 35 percent of the system’s cost of operation in 2013, compared with less than 30 percent in 2000. When compared fairly across agencies providing similar services, MBTA riders now cover about as much of the cost of transit service as users of other U.S. transit systems (and a greater share than customers of Regional Transit Authorities across the Commonwealth). 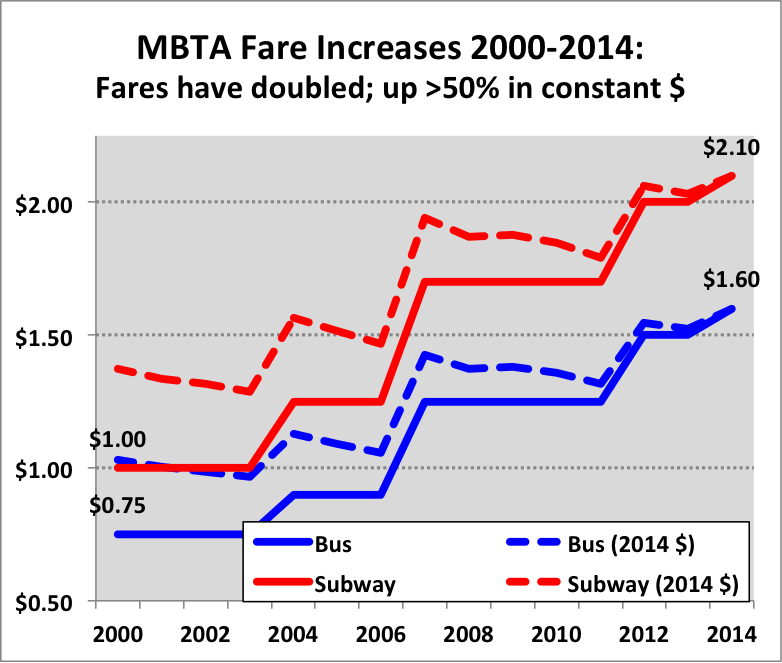 Those fare hikes came in fits and starts, with the MBTA holding off on fare increases for years and then suddenly proposing dramatic, disruptive increases. The effects of this practice were twofold: it enraged T riders and it put a serious dent in ridership.

For example, the 2007 fare hike that lifted base subway fares by 36 percent (PDF) reduced MBTA ridership by 9.5 percent, even as it increased agency revenue by 23 percent. Fewer riders translates into more driving and more air pollution.

In 2013, the Legislature shifted gears, forging a compromise of sorts between the agency’s need for new revenue and the need to keep the MBTA an affordable option for riders. It did so by enacting transportation reform legislation that assured that transit fares would continue to rise, but that limited the rate of increase to no more than 5 percent every two years. In 2014, the first fare hike under the new law took place – notably, with no protest from riders.

It is this compromise that Gov. Baker hopes to revoke, without any clear idea of what would replace it. Gov. Baker has stated publicly that he doesn’t want to “drive people off the T by making services unaffordable.” The governor’s MBTA Special Panel has made clear that it sees increasing the farebox recovery ratio at the T as being as much about reducing costs as increasing fares. And Transportation Secretary Stephanie Pollack has hinted that the administration would consider new approaches to transit fares – such as means-tested discounts for low-income riders – as opposed to across-the-board increases.

Those new approaches – along with others such as time-of-use and distance-based pricing – are worth a look. But unlike the many other urgent issues that will immediately face the new Fiscal and Management Control Board, establishing a new fare policy for the T is something that is best done deliberately, following careful study, and in consultation with the riders who use the system every day. All of that can happen even as the current fare hike cap remains in place.

MBTA riders are already paying higher fares, and will continue to do so into the future. Before we remove the one safeguard protecting them from a return to the era of disruptive fare hikes, we need to take the time to understand the implications – for riders, for our environment, and for the Massachusetts economy.

Kristina Egan is Director of Transportation for Massachusetts, a statewide coalition of 56 organizations working for better transportation choices for everyone.  Tony Dutzik is senior policy analyst with Frontier Group, a think tank focused on public policy issues. He is based in Boston.

[1] Inflation adjustment based on Consumer Price Index. All fares assume use of CharlieCard; fares for paper tickets are higher.