What New Census Data Tell Us About Transportation in Massachusetts

The U.S. Census Bureau on September 15th released the latest data on commuting in America from the 2015 American Community Survey (ACS). A quick read shows that Massachusetts continues to experience a slow slide in car commuting, and an increase in the importance of transit and active transportation – driven in part by economic and population growth in the region’s core and, relatedly, by shifting patterns of commuting among younger residents.

First, some caveats: the ACS is a survey that can carry big margins of error, especially when looking at small segments of the population. Year-to-year changes can be “noisy,” making the ACS useful largely for looking at longer-term trends. In addition, the ACS asks respondents to mark the single mode of commuting they used most frequently and for the greatest distance in the previous week. While the world is getting more multi-modal, the ACS, at least so far, is not. As a result, modes of travel such as bicycling tend to be systematically undercounted in ACS estimates. Finally, ACS data cover only commute trips, which make up a small portion of overall travel.

So, with that out of the way, what do the data tell us?

First, on a statewide level, reliance on cars for commuting continues its slow, steady drop – from 83 percent of all residents in 2000 to 78 percent in 2015. 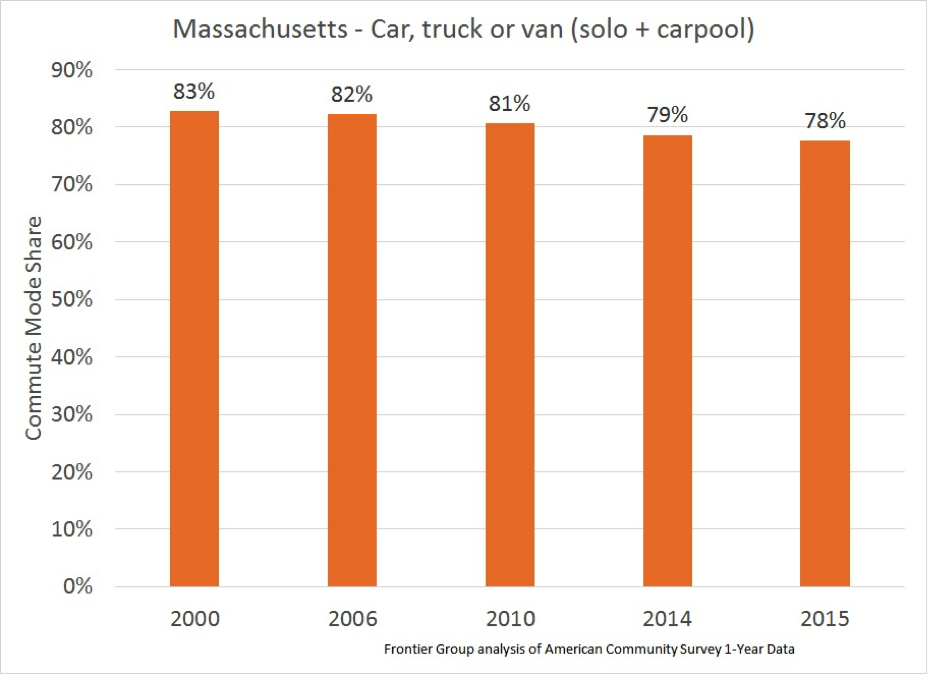 The change in commuting patterns has been greatest among younger residents, with workers under the age of 45 reducing their reliance on car commuting by 5 percentage points between 2006 and 2015 (from 70 percent to 65 percent), compared with a 2 percentage point reduction (from 78 percent to 76 percent) among workers 45 years of age and older.

The Boston metropolitan area (which extends into southern New Hampshire) has experienced a parallel decline in car commute mode share, with 75 percent of metro area workers arriving at work by car in 2015, compared with 80 percent in 2006. Every other mode of travel – transit, walking, working at home and “other” – increased during this period, with transit commute mode share increasing from 11 percent to 13.3 percent regionwide.

Part of this shift is driven by the concentration of people and jobs within the urban core. Boston’s historic building boom – which has also drawn in nearby cities such as Cambridge, Somerville, Quincy and Chelsea – is creating a huge new market for public transportation and for other modes of travel such as biking and walking. Since 2006, the city of Boston has added population more than twice as fast as the rest of the metropolitan area, as well as the rest of Massachusetts. 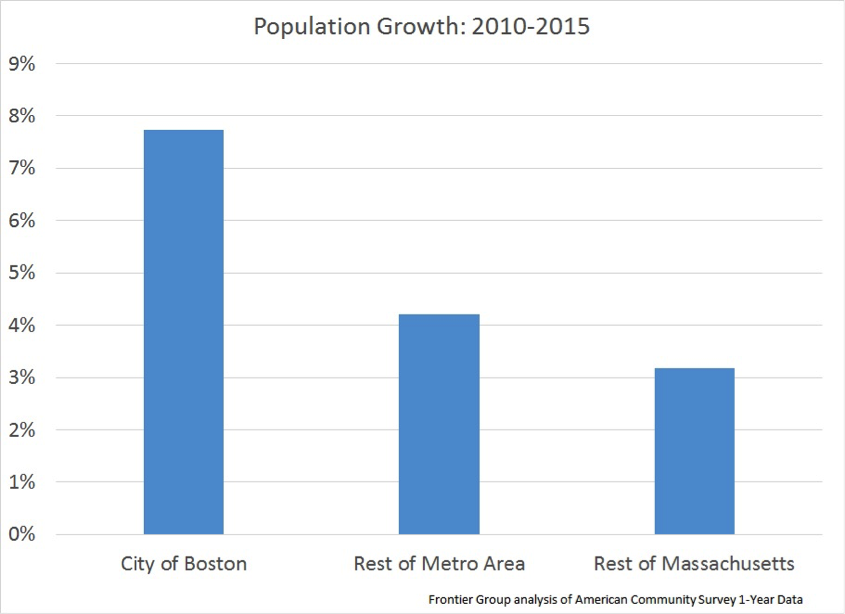 The growth of jobs has been similarly focused in the urban core. With more people living within striking distance of their jobs in the core, it is no surprise that more people are using transit. Between 2006 and 2015, transit’s share of inbound commuters to Boston increased from 37 percent to 40 percent, as the share arriving by car fell from 52 percent to 47 percent. Between 2006 and 2015, the number of people arriving for work in Boston each day via transit increased by more than 68,000, consistent with the steady increase in ridership the MBTA has experienced during that period.

As noted by The Transport Politic’s Yonah Freemark in a series of tweets, both the city of Boston and the Boston metro area are among the national leaders for reductions in solo car commuting and increases in transit mode share since 2005. So there’s much to be excited about.

However, the Census data also highlight some of the challenges the region faces. While the share of commuters traveling to Boston by car has decreased since 2006, the absolute number has grown by more than 30,000. If the urban core is going to continue to grow without a surge in congestion, we need to find ways to expand access to high-quality transit – along with safe and pleasant biking and walking – to more people in the region. Failing to do so can only result in stunted economic growth, a resurgence of expensive and environmentally damaging sprawl, or an increase in congestion that will cost more of us time, money and precious sanity.

And, of course, with more people and limited transit options, the cost of housing is increasing drastically around the urban core, particularly near transit and in walkable neighborhoods. That can result in displacement of many long-time residents to areas with even less access to public transportation. If the actual market for transit and walkable urban living near the region’s core is growing, as shown by the Census figures, then the potential market is far, far greater.

Massachusetts is moving away from car dependence. By making smart public policy decisions, and making transportation investments that reflect these changing conditions and preferences, we have the opportunity to continue that progress in the years to come.